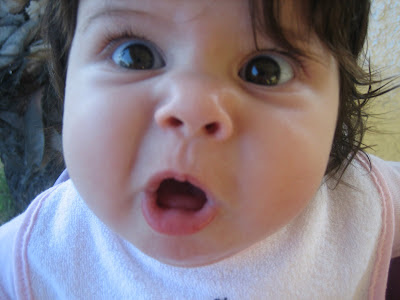 Another hotel room. Back in Vancouver this time. Itunes has chosen "Seperate Ways" by Journey and that seems appropriate. Not lonely, not really bored, I've culled enough watching and reading material for the trip. Trust me, 4 hours of Kevin Smith monologuing is more than enough. Beth just sent a bunch of pics that I will deposit on this page. Pics she took of Zoe on the porch. That's their thing; the porch. They love it. It's their time. Me, I haven't spent more than 5 minutes in the front portion of the house since the kitchen (read:my room) was completed. Beth and I were chatting when she had to go put Zo down for the night. It's not the first time that I haven't been there for the ritual but it cuts this time, for some reason. I often get melancholy when I travel. Because I do it so often and I do it alone. Vancouver is a great city, but I've been here more times than any other city I didn't reside in now and I've seen it. I've been there. And 90 minutes on an immigration line will harsh any travel excitement.

I was recognized again. This time it was two women at the work permit cashier station. It wasn't a good recognition, though. It was the kind that middling tv stars must experience. When two strangers turn their backs to you, whisper and shoot glances over sunglasses your way. I know that look. I've DONE that look. It's a lonely feeling, I'll tell you. I wished I could crawl into my motorcycle jacket and wrap my shades to cover my entire face. Or better, I wished that the damned cashier would open another window and let me go on my way.
Oh, yeah, the pictures.
So, Beth sent these shots of Zo and I just got done adding them to a folder and had a good look.

Someday, Someway by Marshall Crenshaw. Did this ever feel fresh? It's like 1962 revisited. Ah, the ironic 80's. Tongue in cheek nostalgia
was so hip back then. Now it just seems like style-apeing.

Okay, Zoe. Yeah.
I've been feeling more and more tonight (tonite) like Zo saved my life. Not in the way that the doctors saved my life 10 years and 7 years ago. Not like Liz saved my life when she was alive and then at death. Not the way Beth did when she attached her clasp to my weird, world traveled chain. In a totally different way. And I should be able to describe it but I don't know that I have the patience to search for the words.

Julianne by Ben Folds. I should like Ben Folds more than I do. He's snarky and sardonic. But, you know what? He's too accomplished. His craftmanship outweighs his cheekiness.

Zoe saved my life. Not saved, really. Because i wasn't dying. And she sure didn't replace Liz. No one could and that wasn't why we had her. My life has been imbued with a new sense of.....not purpose....not responsibility.....no....what's the word.....?

Mean to me - Crowded House. I loved that album. Reminds me of the year I moved to Los Angeles. I've been told that all the later Crowded House work is better but I've never dabbled. For me it was sublime. Enough that I didn't want anything else to supplant it's greatness.

The word.
Fun.
Peculiar. You know? Children are the great magnifier. I believe. When someone you know has a child their true self comes through as though blown up to movie poster size. If they were a little neurotic they are Annie Hall. If they were cold, they are an iceberg. I think kids are the truest and surest way to determine what kind of person one truly is. In Beth I have seen kindness and generosity exploded to proportions equaling that of a charity worker.
In me.....I have no idea. I know that I am even more aware of my mortality. But, that's nothing new and I'm no more of a fatalist than I was before. I'm sure someone out there can better describe my magnification.
For me, it's all about fun.

Do the Necronomicon from Evil Dead the Musical. Damn that show was fun. Derivative as hell. Not an original moment in it. It was probably more fun to say I saw and talk about than it was to see. No, wait, strike that, reverse it. It was more fun to see and, afterwards, talking about it made it seem better than it was.
But it was fun.

And that's what having Zoe around is like. It's just fun. Fun to watch her watching herself on the computer. Or straining to see the tv when I won't let her, even though she knows that the TiVo remote makes the magic box show it's pretty colors and sounds. It's fun to kiss her tummy and watch her smile even though it's tickling and that's a form of torture, isn't it?
When i put her to sleep I love to talk to her. The other night I spent 20 minutes feeding her and telling her about all the places I have lived since I was two. 22 places. Shit, that's a lot.

Round Here - Counting Crows. I always forget until i hear this song that I think it might be the most beautiful I've heard. And when it's over I've forgotten about it again.

22 places. from my parent's first apartments to New York, to LA to the desert, to this place we live in now. Our home. And it feels like home.
And I'm beginning to think that there isn't any reason Zoe's room couldn't ever contain bunk beds, y'know? 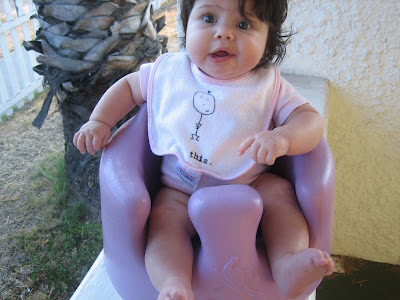 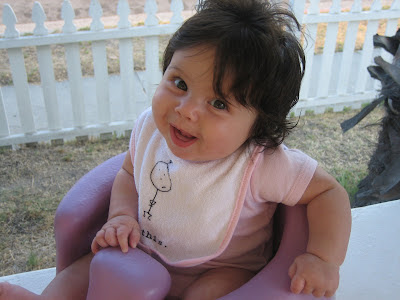 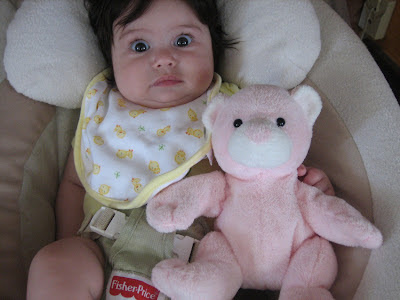 Too tired to write.

Ever have one of those day where you just don't want to write a damned thing? I think it's a combination Zoexhaustion and too much coffee. Brain. Not. Working. Thoughts not forming.
Okay, forget it. Here's some new pics of Zoe.

is it just me or does Zo look like some chick you would hit on in a roller derby in 1979 and if you pissed her off she would punch you in the throat? Treat me Right, indeed. 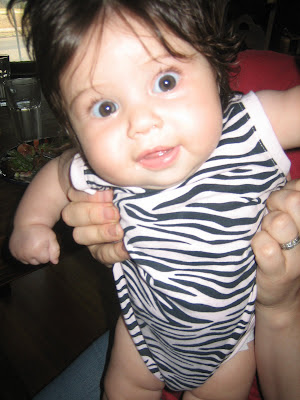 It's difficult to get pics of Zo laughing. Mainly because the camera isn't fast enough for the pics not to be blurry and the flash just won't cut it. Doesn't matter. Here's one of the laugher. 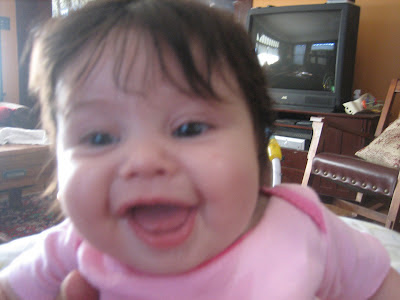 Nana sent Zoe a ton of Beany Babies. Remember Beany babies? Zoe has about 40 now. her favorite? The poodle. The POODLE! Well, better that than the chihuahua.... 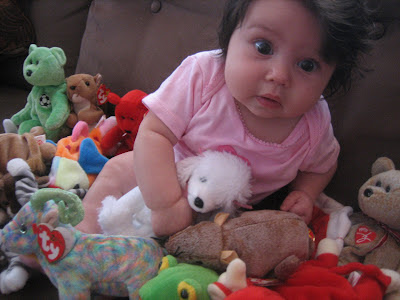 This is kewpie doll just being cute. Gotta love it. 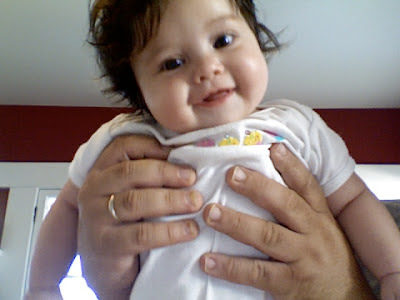