I'd recognize your foul stench anywhere..... 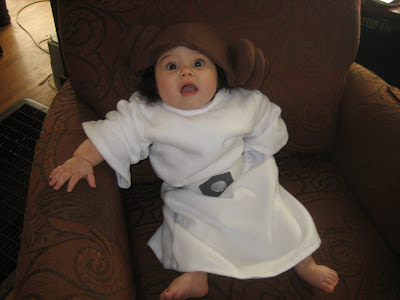 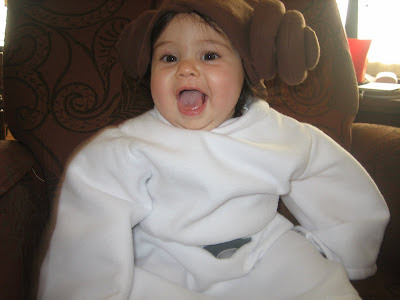 Laugh at me all you want, wife. I am NOT alone! 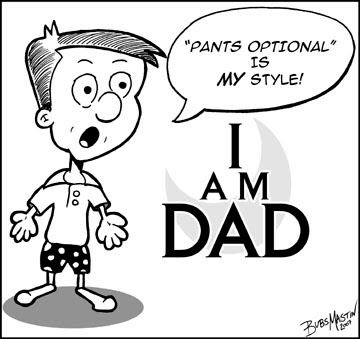 I don't recall if I mentioned this before but who cares? Man, I just can't get over how much in love with the "magic box" Zoe is.
I mean, yes, Beth and I are both tv watchers. Avid tv watchers. We love our tivo. (I think a little more than we love each other.....) And when I say TiVo I mean Tivos because we have three. One in the kitchen that records news and cooking shit that I like to watch while I am in "my room" (and I am always in my room). There's the occassional smattering of regular programming as well, but it's not a sit back and watch the tube kind of place.
The living room is a dual mode dvr so EVERYTHING gets dumped on to that. And the tivo in the bedroom never gets watched but I use it to record stuff which I send to my macbook via wireless adapter. Shows that I can then burn as dvds or encode for ipod viewing.
Back to Zo.
She knows the sound of the TiVoi remote. Seriously. I think it's because i used to do the late night feedings and watch reruns of Friends and Cheers at 3 in the morning. The "bloop bloop" sound was something that Zo got to hear early. And now I had to turn off that feature in the kitchen because if she is in the living room and hears the "bloop bloop" Beth can't get her to concentrate on anything else. She cranes her neck to see if she can find the tv.
The same thing in the living room. She will stare at the magic box for what seems like forever even when it's off in the hopes that the dancing lights and colors will suddenly come on. And if it doesn't then she STARES at the remote. I swear she thinks she can turn the damned thing on.
I had to give her a broken, unused tivo remote as a playtoy. It's one of her favorites.
And it's the same with the ipod. To her it's just another magic box. It has sounds and pretty pictures.
And since we are crazy neurotic about what tv does to a kid's wiring we are trying as hard as we can not to let her watch.
But you know what? When she is screaming at nothing and wailing because, well, we don't know why, those times are few and far between, not often at all, sometimes plopping her in front of the tube and letting her watch a little Jack's Big Music Show isn't such a bad thing. Is it?
It's when she leans as far out of her high chair as she can and stares at the blank screen that I worry.
Posted by Allen Lulu at 12:12 PM 1 comment:

It's the Great Pumpkin, Zoe Mina!

Yesterday was pumpkin patch day. Beth had found this great pumpkin patch in Beverly Hills with a petting zoo, bouncies, pony rides and crochety, mean BH moms who hate you and your dog and everything that isn't theirs. Ah well, that's one great thing about not living in BH. Gimme the Ghetto over snobs anyday.
We packed up Huck (Because, despite what the mom whose child is scared of dogs said, this is a dog friendly place).
It was blistering hot. Kids were having tantrums. Literally. One girl was lying face down in the hay, pounding her feet and hands and screaming uncontrollably. even Huckleberry hated this kid. But he did his job, sitting still while she pet him through her tears.
It was a blast. We got our pumpkin. Beth will carve it today. I did it last time. It was a miserably frustrating experience, replete with yelling, cursing, crying and fights. Good times!
Actually, I am way more into the holiday spirit this year. I don't know why. Maybe it's Zo. That's got to be a part of it.
Maybe it's best explained by the young woman who stopped by our table at Swingers when we were all having breakfast before the pumpkin patch. She leaned over to smile at Zoe, while she was petting our dog, Beth was finishing up her eggs and I was sipping my coffee. The woman said, "What a nice family."
I couldn't agree more.

Here's Zo at the pumpkin patch. 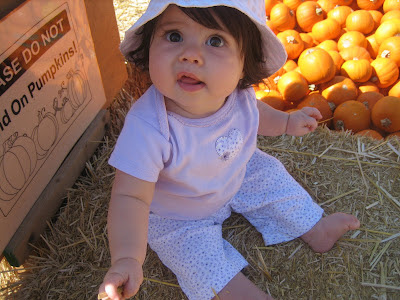 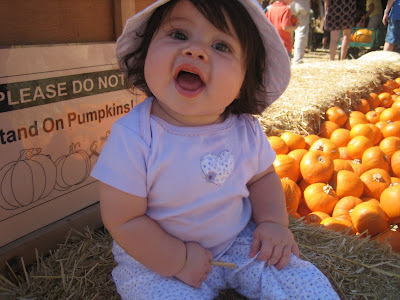 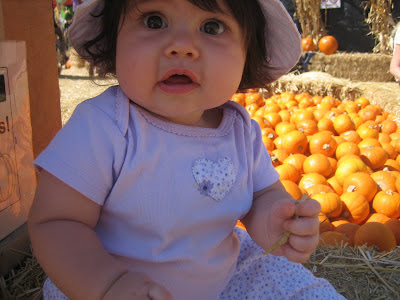 everything in its right place...... 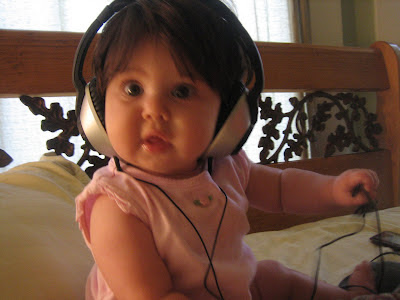 Zoe listens to her first Radiohead......

Am i a good father or what?
Posted by Allen Lulu at 5:14 PM No comments:

Yesterday Beth took Zoe to the pediatrician for some shots, (flu, vaccines, etc) and a reg'lar checkup. This was a cause of slight stress for me because a few months ago the perfect storm for Allen's neurosis was starting to manifest: Zoe's weight was in the lowest percentile (around 10%) and her height was also low, no shock there, considering that Me, my mother and both grandmothers on my side make up our own lollipop guild. But, it was that coupled with Dr. Nagle's demand that Zoe eat around 8 ounces per feeding and that she consume 35 ounces a day that had my fear hackles up. This kid does NOT eat 8 oz a pop. We're lucky if we get 5 into her. We toss more formula than we make most of the time. Sometimes she will surprise us and down 7 but that's a rarity. So, at 4 oz per feeding we're looking at feeding her 9 times a day. She wakes up at 7 and goes to bed at 7. So, we would have to feed her every hour and 15 minutes. So, I was concerned, needless to say, that we weren't feeding her enough. Can you imagine a LULU not eating enough? Ha! But Zo has been on a tear lately. Chomping down every kind of solid food we give her. We started, of course, with rice, but moved quickly to mashed bananas, peas, squash, green beans, etc. The rice is useless. It's too watery and bland. Zo has a non-discerning pallette, it seems. Prunes? Awesome. Pears? Why not? We open it, she tastes it, then she grabs the spoon and wants more more more.
So, when Beth was taking her in I was on pins and needles waiting to find out the result.

I shouldn't have worried.
Zo has climbed out of the cellar and is now around 40% for both height and weight. The doc was pleased. He also told us to start biscuits. I know, every label says to wait until they are 9 months but I think that is for the company's protection. Once she got the hang of what the biscuit was about, Zozo wouldn't let it go. I think she got more ON her then in her, but she did a pretty good job. Only gagged once.

Zoe's also taken to waking up a lot at night. The reason? She has begun to roll over. We can't keep her on her back at night. She is all the over onto her tummy within minutes. The doc is also unafraid of SIDS at this point. Zo has the capacity to pick herself up, he says. I concur. She is moments away from crawling. But, she cries because she hasn't quite figure out how to extricate her other arm from underneath after she has rolled. I wonder if it is falling asleep. THAT would suck. Regardless, we're in for some loooooong nights until she figures this one out.

Let's see, what else?

She's ahead of schedule for most things, this kid. She's supposed to be making "da da" and "Ga ga" sounds about now, but she has been doing that for weeks. She is supposed to be pushing up to stand with her legs (assisted) at around 6 or 7 months, but she's been doing THAT for months. And pincers. Babies are rakers, using their whole hands to grab stuff. Pincing comes around month 10. Zo alternates between the two. It's about even. But I don't think she's supposed to even be doing that yet.

Lastly. Beth thought she noticed a lump in one of Zo's boobs. Like a cyst or something. So, she asked the doc about it. Nope, not a cyst. Zoe has a lot of hormones. It's a boob. She has the very teeny, weeny makings of a boobie under there.
Apparently it's pretty normal. I think she's going to be that girl who develops early. Like 10 or 11. Damn, a LOT of boys are gonna want to do homework with her........

Some new pics for you. 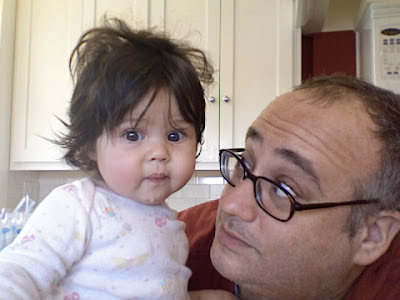 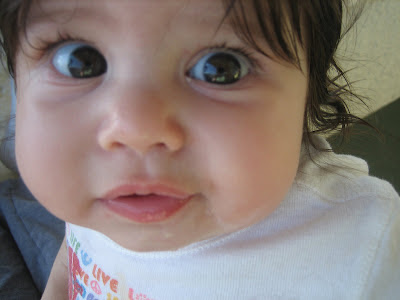 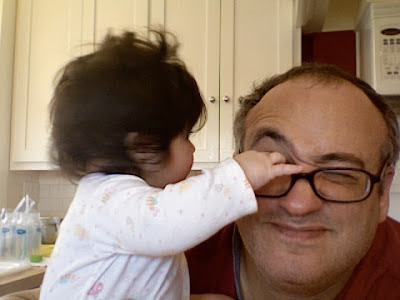 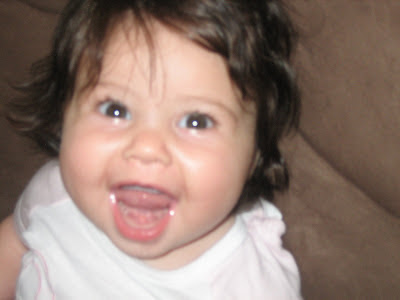