Two thirds through the holiday season.

Welp, the second batch of holidays are done. Buh bye!
Halloween was easy, surprisingly.
Then we had Thanksgiving. I'm sure we will post a bunch of pix from that but I must say, Zo was fantastic. The drive up to Sonoma was a cinch. Zoe got us up around 4:30 so we fed her, packed the car and were off by 5:45. First time we ever rolled into Wine Country during daylight. What a nice ride.
The enxt day it was off to pre-thanksgiving with Aunt Gloria (my mother's aunt, atchelly) and her husband, Jerry. When she told us "the kids" were coming, I had an image of 10 year olds. Not the 20-somethings and their spouses. What a treat. Conversation was terrific. Food was incredible. And Glo and Jer are granparents again. It was so nice.
Then back to Glen Ellen and the Kirkpatrick side.
I never had to hold Zo, to be honest. There was always someone who wanted the kid and we were only too happy to oblige. Especially Nana, who just adores lil Zo.
And I gotta hand it to the Zoester. She didn't have her swing or her music and she still took her naps like a trooper. Face down in the pac n play.
Beth and I even got an afternoon to ourselves. We hit a tasting at a ridiculously overpriced winery, bought some damned good Pinot and even got to tell the waiter that one of the wines was "piss". We were right. He said that they had mismarked the vintage and that the wne we tasted was, indeed, terrible.
I prefer "piss".
Zoe also decided to cut her first teeth this trip. Two bottom ones. Sharp as all get out. Still no tears. Oh, yeah, turns out she LOVES yams. Go figger.

The ride back, once again, Zoe was encroyable. She sat in that damned car seat for the better part of an 8 hour drive and only cried once and even then only for about 5 minutes. God Bless Laurie Berkner.

Just got back from shopping and we are prepping for the big trip in December. Cincinnati/Kentucky for X-mas then aNOTher 8 hour drive to Chicago to see Jon and Julie and the J's. Then back and then home and back to work.

here's a shot I grabbed of Zo at the market. Couldn't resist. 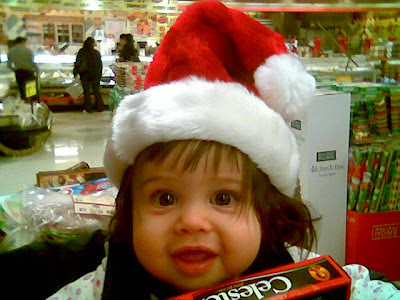 Posted by Allen Lulu at 5:14 PM No comments:

Zoe is weird in Rockin Tot class. She doesn't participate the way she does at home. She observes. She watches. She takes it all in. She might start pounding on the drums but only when everyone else is done.

Beth assures me that she is not retarded.

If she is, she's damned cute.

Posted by Allen Lulu at 7:29 PM No comments:

Zoe got dressed up for Hallow's Eve.

Take the Prisoner Away!

one more from Halloween. Because, well it's so damned apropos. 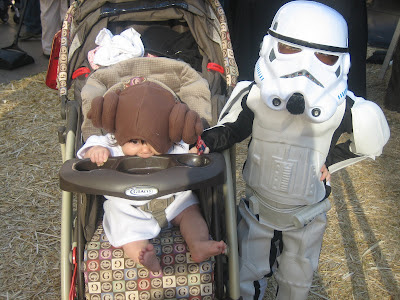