Okay. The terrible twos are in full gear. Zoe is a ditto machine. A recorder. A sponge.
We made the mistake of letting her see some Christmas movies, figuring, "Hell, it's X-Mas, it's special time, let her watch Frosty, fer god's sake!"
Wow. What a can of worms that opened.
Zoe is addicted to Frosty as I may have mentioned before.
She wakes up and talks about "Fossy Sno-men."
Then she points to the stuffed Frosty we made the mistake of giving her, thinking it so adorable that a child who has no concept of snow would fall in love with a SNOW man.
Then, she toddles out of her room, points to the living room and says, "I watt (watch) Fossy?!"
And, of course, the holiday is over so our answer is, "No."
Then she cries, sometimes the tears are real, other times they are crocodile tears.
But they are always followed with the exclamation of:
"I cry! I cry...... I CRY!"
In a way that seems to be saying, "Don't you understand? I was crying and, therefore you should give me what I want, for I was crying. Tears were streaming from my face and they were tears of sadness, be they imaginary or real. See, I CRIED for Frosty, Dad, and you should let me watch. Otherwise you are a very very bad dad." 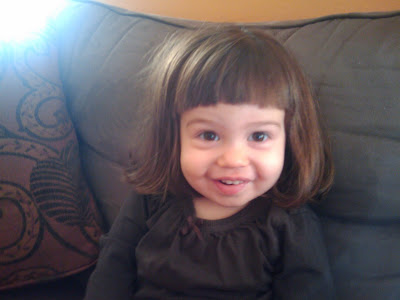 You decide.
Posted by Allen Lulu at 11:16 PM No comments:

I know this is ridiculous and every parent is amazed at every little thing their kid does but, heck, it's been so long since I was part of a toddler's experience that I am giddy every time there is something new. And I am getting dangerously close to that time when it's all new and alien. (I was only intermittently in Liz's life from the time she was 2.5 til she was almost 5. It was a long time and a lot was missed.)
Zoe is a swingaholic. Most toddlers are, I guess. They love that feeling. Me, I get nauseated just thinking about it. I can recall being very young, maybe 5 and there was a swingset on a concrete slab behind the apartment we lived in.
I only have one memory of swinging on it, though. And that is immediately accompanied by a memory of that tingling feeling one gets on roller coasters. To some, it's exciting. I guess. To me it just feels like my insides are being tickled and not in a good way.
I took Zoe to the park today. The housekeeper was cleaning and Beth was doing stuff and we just needed some Dad and Daughter time. I wheeled her up to the park in her plastic car. She made a beeline for the swings.
There are only two at this park and they are side by side. One is a baby swing with a chain and the other is a big kid swing.
There was a kid on the baby swing. A four year old. His older brothers (way older) were swinging him. When all of a sudden, whoosh, he slid right under the chain.
He's four.
He didn't do it on purpose.
As we made our way over we were headed off by a woman and her 2.5 year old daughter. I assume the daughter is mute because she didn't utter a word the entire 30 minutes she was on the swing.
No matter. Beth had told me that she had, on occasion, put Zoe on the big kid swing at this park, since there are few options.
I did.
She immediately grabbed the chains.
And she swung.
For about a half hour.
Never needed to get on the baby swing.
I'm impressed.
What can I say?
Here's a couple of shots. 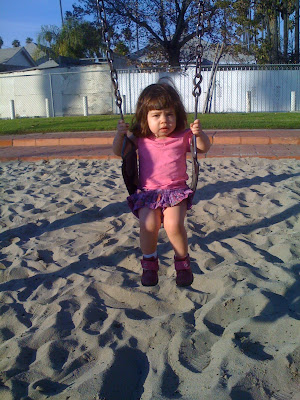 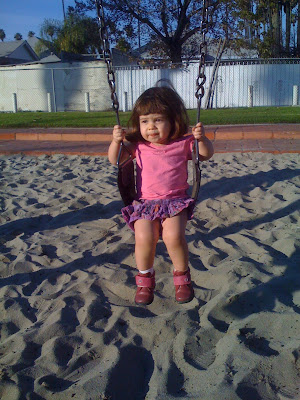 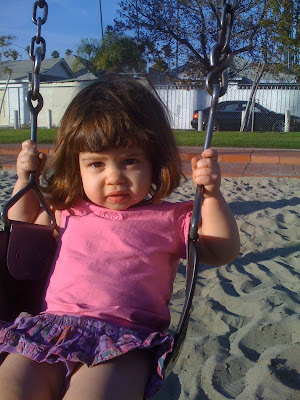 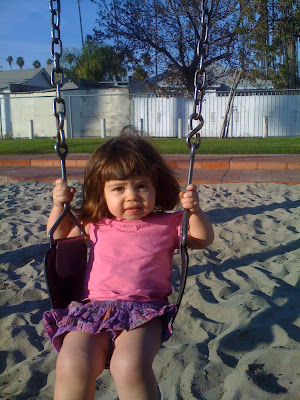 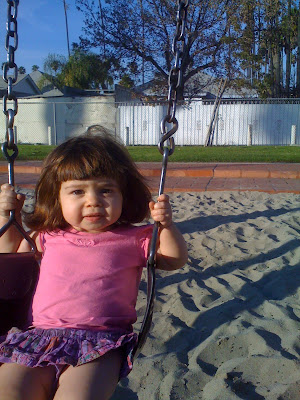 I haven't written much lately, I know. It's not that there hasn't been anything going on, there have been holiday parties and celebrations and dinners and events ad nauseam.
And it isn't that I post pretty regularly to facebook (seriously, people, get on facebook, it's sooooo much easier to keep up with people and self blogging is a dying...um...art)
All that said, the reason I haven't posted too much here is that because of one person and a letter that I received.
I won't mention who that person is, because it would be embarrassing and I'm not here for that. Suffice to say it's someone whose opinion meant a lot to me. And that person seriously chided me for using the various mediums (YouTube, Blogger, Facebook) to report on my daughter. This person made it seem like it was an invasion to them and it made them feel like I was bragging about my kid and/or they felt inadequate about theirs. (Either their child or the fact that they don't bloviate about their kid the way I do.)
I was taken aback and it took me a while to realize....
I don't give a damn.
You don't like the show? Change the channel.
The lengths that some people will go to to control others or judge is astounding.
I recommend unsubscribing from this blog if you feel that reading about Zoe and her life is an imposition or overindulgent, self-aggrandizing ballyhoo.
So, here we go.

As you know, Zoe was born with hair that would make Sweeney Todd salivate. The thing about this stuff is, it keeps growing. Bangs in the eyes, hair in the face, it's unmanageable and hard to cut, for all of Zoe's energy and need to wiggle her head in the direction of the point of the scissors.

So we took her to Yellow Balloon, which is a barber shop in the valley that specializes in children. They have toys, tv's playing Kung Fu panda, pinball machines, balloons, it's quite festive. (Adults get their hair cut there, too. And when we went there were two men, both in their 40s that were getting their hair cut. That was scary in so many ways.)

Zoe approached the barber chair, oblivious to what was about to happen. 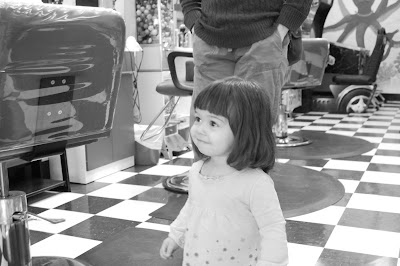 The odd thing was, once she got in the chair....She was remarkably co-operative. Just. Sat there. 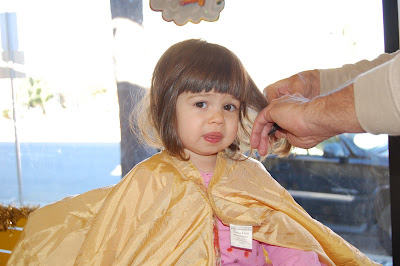 She even seemed to enjoy watching herself in the mirror at times. 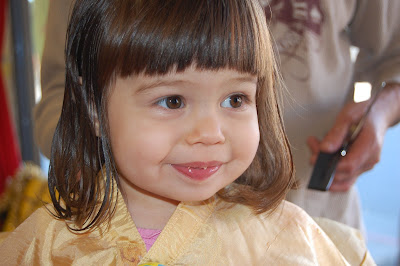 She did everything the barber asked and more. 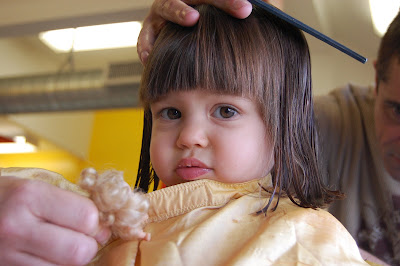 And in the end, she ended up with a nice cut and some glitter. (We didn't ask for it and had we been we would have declined as it was close to naptime) 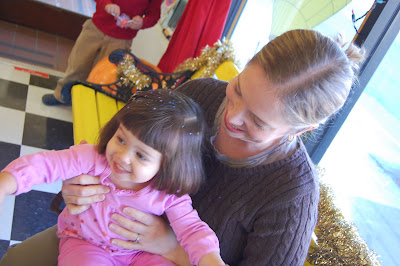 The thing about Zo's hair is the way it waves, when we brush it we can either bob it under like you see here or give her a Carol Brady flip. And you KNOW which I prefer.....;) 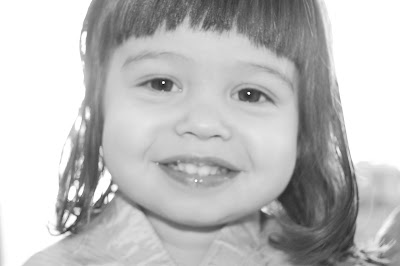 Yes, we did it. We introduced Zo Zo to the mythical figure and uber-lie that is Santa. To the Grove we went where Santa's house is ginormous, fake snow falls from the sky and miniskirted rockette type dancers ride the trolly and shake it to Holiday tunage.

We get the video of the experience but I am not uploading it here right now.
If you want to see the short flick, come on over to Facebook, add me (or Beth as a friend) and you can see it there.

Hope to see you there!

update: Here is the video for those who don't wish to come to the Facebook gulag.