Zoe is cooler than you 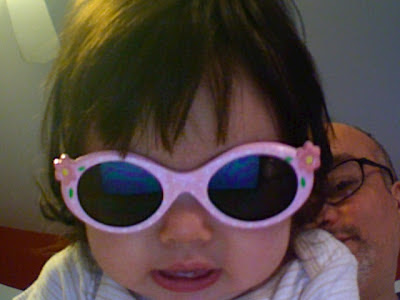 Standing up for herself!

Yes, yes, I know, we post way too much mundanity. But, it's a milestone and we are proud.
Zoe is frustrated. Hates to sit, so she pulls herself to crawling position. But she doesn't like to crawl. It ticks her off. It's not fast enough. Life's too short! Gotta GO!
I've written enough about how she likes to stretch her legs. Well, here's proof.
Even though it might look like it, I am actually doing about 3% of the work for her. She's really pulling herself up. And pretty damned proud of it, too.

I know, this is the most pretentious 'proud papa' bs post but, here's the deal:
I cracked the reading code when I was 18 months old. I mean, I wasn't reading Tolstoy or Kozinski (that was for when I was a pretentious 12 year old and, apparently, wanted to get punched in the head whilst carrying around said tomes) but I could recognize "cat" and "Dog" and "Fish" as words and what they meant. Trust me, it was a big deal.
In 1969 I was five and there was really nothing in place for a kid like that, one that could read so early. Oh, yeah, the reading just more comprehensive by that point. So, by the time I was in kindergarten and could read on a 3rd grade level, the only option the school had was to put me in some kind of special ed. My mother balked at that, understandably and I was trotted off to hebrew school where I no longer excelled and that was pretty much the end of it.
Now, I have no intention of being the Rick Moranis character from "Parenthood". If Zo shows an interest, we'll pursue but I'm not going to inundate her with flash cards or anything. (Okay, maybe one or two, but just about the states and their capitals, I promise)
The reason for all this code cracking talk? Zo loves books. She adores books. And this morning, while feeding her, she picked up a soft cover baby einstein book. It's one that we read to her often. And she started holding it like she was reading it. And by that I mean, the picture below. But, while you are looking at that picture, I want you to imagine her babbling on and on and pointing to the words on occassion.

Oh, and this is the most interesting thing she has done in a while, hence the reason for the slow going blogging. 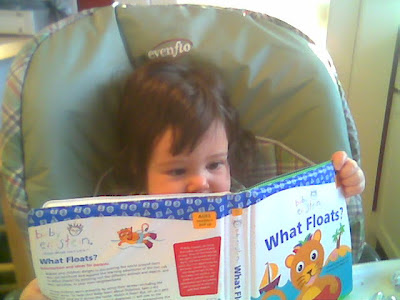 Posted by Allen Lulu at 7:54 AM No comments:

It was the first night of Hannuka. It might also be the first night in 6 years that I remember that it was the first night.
Beth's present arrived at the same time. It's small. It's a calendar of her baby for next year. She asked for it. And her big present was given to her a few months ago. Our friend, Erin Sullivan, was visiting and we asked her to take a picture. Lo and behold, erin's all smarty-pants on us and was filming with the video part of Beth's camera. So, here is the candle lighting for Zoe's first Hannuka.
to clarify, it's a calendar of Zoe so Beth has pictures of her ONLY baby to festoon her wall all next year.

Posted by Allen Lulu at 7:52 AM No comments: